Housing rents continue to decline in the Bay Area amid the coronavirus pandemic, especially in San Francisco, which has notoriously had the country’s highest rental prices after overtaking New York City years ago.

According to the most recent reports from private listing websites Apartment List and Zumper, rental prices have plummeted 20% in the city so far this year compared with the same time last year.

Zumper found the median cost of a one-bedroom in San Francisco last month was $2,830. The company analyzes rental data from more than 1 million active listings across the country. It includes new construction and excludes listings that are currently occupied or no longer available.

“Not only is this drop among the largest yearly decreases Zumper has ever recorded in our history of tracking rental prices, but it was also the first time the median one-bedroom price in San Francisco dipped below $3,000,” said data analyst Neil Gerstein in an email. “These combined trends show just how drastically the market has changed in the nation’s most expensive city to rent.

”Apartment List reported a considerably lower September median cost for a one-bedroom in San Francisco, at $2,240. The median for a two-bedroom apartment was $2,590, a 5.2% decline from the previous month. Its methodology differs from Zumper’s: It starts with statistics from the Census Bureau and Department of Housing and Urban Development, and it includes rents for older units and those in lower-income neighborhoods. 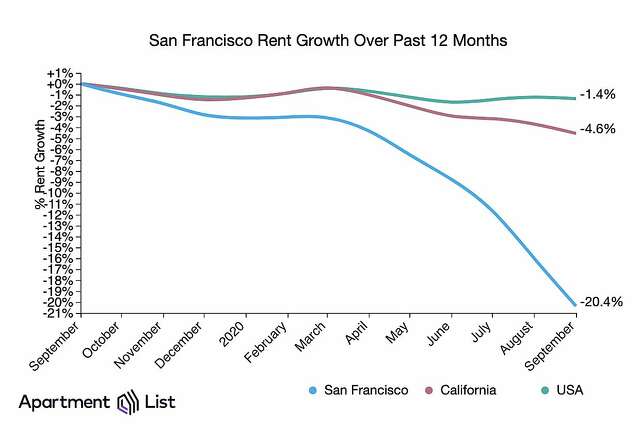 Apartment List’s October rent report shows rents have declined drastically in San Francisco this year compared with the same time last year.
Photo: Apartment List
By either measure, the Bay Area continues to be the priciest market for renters in the nation. Zumper found that the top five rental markets in the country includes three Bay Area cities: San Francisco tops the list, with San Jose and Oakland coming in fourth and fifth, respectively.

Nationally, Zumper listed New York as the No. 2 most expensive rental market and Boston as No. 3. New York’s rents dropped 4% from the prior month to $2,600. Gerstein said that while New York City has also had historic price drops during the pandemic and renters appear to be taking advantage of declining rent in both cities, there is a notable difference.

“New York’s migration inflows have returned to pre-March levels, while San Francisco’s have not,” he said. “Both cities continued to experience large migration outflows, but the differences in the two cities’ migration inflows may explain their diverging price trends and could lead to rental prices in New York stabilizing faster than in San Francisco and overtaking the top spot.”

Tony finds that living in the Bay Area and working with unique people every day make his job extremely rewarding. He has expert negotiation skills and takes great pride being a relentless advocate for his clients.
Let's Connect